This blog series and the tests reported herein is designed to show some of the key differences between Autodesk Inventor Professional 2011 and SolidWorks Premium 2011 for digital prototyping workflows. This final part of our 8 part blog series examines Mechatronics – the ability to perform cable and harness design in an existing design from an imported electrical wiring diagram. 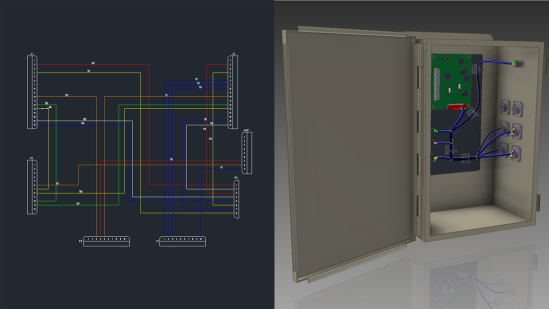 Electrical schematic to be imported into mechanical assembly on the right

Autodesk supplied an Inventor video of their solution, a net list in Excel format, a STEP file of the enclosure assembly, and a schematic drawing (.dwg) of the connections.

Autodesk supplied us with an Inventor video of their solution, a net list in Excel format, a STEP file of the enclosure assembly, and a schematic drawing (.dwg) of the connections.

What we found out

The two software packages (Inventor and SolidWorks) are comparable. Inventor has a tight connection to AutoCAD Electrical with the xml file transfer. SolidWorks has similar tight coupling with some third party software such as Zuken’s E3. Both systems use added cost electrical software to generate the net-list. SolidWorks was not able to read the AutoCAD Electrical generated xml list, and instead used an Excel file with similar data that needed manual cleanup in Excel.

It appears that there are a few more interactions with SolidWorks, but this may be due to the operator-preferred method. Both systems effectively produced the required output. There appears to be no real operational advantage to either package when used with tightly integrated electrical schematics software. Since AutoCAD Electrical is one of the most widely used electrical schematic packages, the advantage goes to Inventor.

For this test, on the AutoCAD side, AutoCAD Electrical exports an XML file to Inventor. Inventor reads this file and generates the 3D wiring and, under user control, assigns wires to cables. It can then generates wire lengths, a flat wire harness diagram and a pin board for manufacturing.

Inventor opens the 3D model and then the xml file of the net-list from AutoCAD Electrical. This designates the pin-to-pin connections where the wires are to be placed. Different than SolidWorks, the Inventor user placed the harnesses in anticipation of the wiring to be imported. The wire import could also have been done first, as seen in the SolidWorks video. The names of the connectors and the number of pins on each connector are stored in coordinated libraries in both the electrical and mechanical systems.

Importing the wires in Inventor

Importing the wires in SolidWorks

After the import, the imported wires appear as direct point-to-point connections between the pins without using any harnesses. 19 wires were imported and identified as un-routed. Then Inventor asks for an auto-route of all un-routed wires. It then places all 19 wires into the predesigned harness, we guess by using closest entry and exit points. Then Inventor builds (and reports) a pin board payout of the harness showing the 3D derived wire lengths. The video below shows an Inventor user performing the test.

SolidWorks takes a slightly different, albeit very similar approach. After importing the net-list, the operator builds a 3D representation of the harness and then places the wires into the harness, with the software computing the wire lengths. This took more manual interaction than the Inventor solution, but yielded the same end result. The video below shows a SolidWorks user performing the test.

This is the final blog in this series. Users can review a summary of these tests, published as Part 1 of this series by clicking here. We have also published a pdf file of the complete report here. The pdf file does not contain any videos. To see them you have to revisit this blog series at raykurland.com.

Raymond Kurland is president of TechniCom Group LLC and its principal consultant and editor. His firm, founded in 1989, specializes in analyzing MCAD and PLM systems and has been involved in reviewing and comparing such software since 1987. Ray frequently consults with both vendors and users. Ray has degrees in Engineering from Rutgers University and from NYU. His career included stints with Bell Telephone Laboratories, IBM, and Dassault Systemes. Ray can be reached at rayk@technicom.com.

For more information about TechniCom Group and other software reviews please visit http://www.cad‑portal.com and Ray’s blog at www.raykurland.com. You can also follow Ray on twitter using the id technicom.

Wow, driving back and forth from Boston to NJ really did me in. 500 miles in a few days, packed with several traffic jams from accidents, plus sitting in conferences for 2 days! So this blog may come to you a bit late. In the way of openness, Siemens paid for my travel expenses to and from the meeting as well as two nights at the hotel.

Anyhow, on Day 2 of the conference (22 Sep), I had the opportunity to view Siemens already released (last week) Mechatronics Concept Designer (MCD) software – a terrific idea, and aptly suited for designers of complex machine tools, especially those machines or groups of machines with lots of parts in motion. Later in the day, Dan Staples, Solid Edge’s head of development, and original architect of ST, described what’s coming in their upcoming release of Synchronous Technology 3 (ST3).

Built as a stand-alone solution, Paul Brown of Siemens, Senior Marketing Director, stated that the Price was about $20K, had no software prerequisites, and includes a copy of NX to assist in the design detailing. 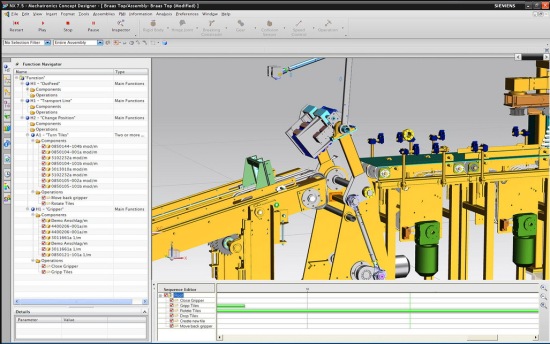 Shown in the image above is an example of a machine designed with MCD. Designed to work with NX and Teamcenter the idea is to map out a block diagram of the prospective machine, use a library of functional parts that can be re-used or designed, add requisite motions, and prove out the design concept. Then the concept design is passed on to the appropriate engineering disciplines to continue to add detail to the design. I really liked the concept, but there is too much detail to describe here. You can see more at http://www.plm.automation.siemens.com/en_us/about_us/press_kit/mechatronics-concept-designer.shtml.

What is really appealing is that design concepts like this could only have been done before manually, and because of the complex interactions of 3D and motion, would have been very difficult to design and extremely error prone. One could easily imagine this technique used for other design projects.

On the ST3 upcoming launch, due in mid-October, Solid Edge (SE), part of Siemens’ Velocity business unit, and headed up by Karsten Newbury (see my blog dated 22 July), continues to press the envelope by extending ST into assembly design, and allowing a mixture of history based design and ST unordered design. Incorporating some 2000 customer enhancements, ST3 should be an extraordinary release. The ST3 modeling advances also allow all of SE’ other apps, such as piping and wiring to use ST technology and auto update as changes are made.

Got to get some sleep now.

22 Sep 2010: Yesterday Siemens PLM Software (SPLMS) kicked off its annual analyst conference in Boston, MA, following a years hiatus due to the economy in 2009.

As usual, a really packed day resulted in information overload by early afternoon. Alas, we are not scheduled to get any of the PowerPoint slides until later today so I cannot yet share any with you. Nevertheless, after nine hours of listening, 30 pages of notes, and viewing hundreds of slides, here is short list of the more significant highlights of the day: