A few weeks ago I attended the Siemens PLM Connection 2011 conference in Las Vegas. Since returning I have been busy with all kinds of matters, but I wanted to get some of my thoughts on the conference to you, my readers. Siemens promised me copies of the slide presentations, which I have recently received. As any of you who have attended similar conferences, the slides go by so fast that there is little time to write the key points down.

Arriving at the hotel on Sunday, May 1st, the event started with a small cocktail party of the media with some Siemens executives. I had a chance to meet with a briefly speak with some executives before going to my room exhausted from traveling and standing on my feet for three hours. Among the execs I had a chance to speak with were Eric Sterling, Dave Shook, Kris Kasprzak, Tony Affuso, and Dan Staples. The mood was decidedly upbeat and all were excited about their performance the previous year and so far in 2011. I was unable to get specific details, as is Siemens’ custom.

At the kickoff keynote the next morning Dave Shook, Sr. VP Americas, opened the session and introduced keynote speakers from Microsoft and IBM. These were the usual pitches from cooperating vendors. Instead both companies discussed interesting technology challenges; Microsoft discussing how unstructured data can be managed, and IBM discussing the challenge of hyper digitization and the need to close an innovation gap with the velocity of change accelerating.

Tony Affuso, Chairman of Siemens PLM followed with highlights of the company’s year. Basically Siemens PLM is on track after five quarters of growth, now with 68,500 customers, 7.2 million seats, and double-digit license revenue growth. This compares to Dassault Systemes (DS) real growth last year of 7%, less the temporary revenue bump from the IBM PLM acquisition. The company has a good backlog and is executing across the board and winning substantial accounts. Following Tony was Claus Oesterschulze, describing Siemens extensive effort to internalize the use of their own software (NX, Teamcenter, and associated apps). No easy task, as in most customers, organizational changes are required along with process changes. Convinced that “IT is a big lever for business” Siemens is aggressively moving ahead and focusing on how to manage complexity. Below are a few slide from the Oesterschulze presentation. 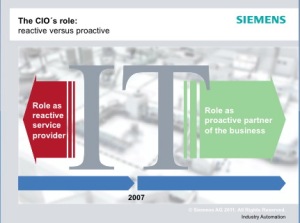 Later in the morning Chuck Grindstaff, President and CTO of Siemens PLM Software presented his “technology vision.” He viewed where they are today in fully integrating Teamcenter across an enterprise to fulfill its PLM needs: view models fully and anywhere, check a model against its requirements and be able to trace these on the products; review and initiate simulations against specs directly in the CAD environment and to ask highly complex questions; ability to optimize the design for performance including cost and sustainability; using Tecnomatix to insure that manufacturing has correct models, processes and allowable variations thus enabling what-if manufacturing studies. Thus his focus on a fully integrated system, much of which is already in place today, with more coming shortly, as evidenced by the NX, Teamcenter, and Tecnomatix presentation we saw later in the week. Grindstaff feels they are far ahead of their competitors and that customers can now see that. A strong point in his direction is the ability to implement continuous changes in the product rather that the discontinuous changes that the competition [Dassault Systemes] makes. An interesting point about his thinking was his comment that “If we [Siemens PLM] can formulate the value proposition correctly then customers will listen.” His key investment areas are in intelligently integrated information, continuing their future proof architecture using SOA and XML that isolates and allows ready integration of new software, expanding their TC HD experience, systems engineering expansion, integration of domains such as MCAD, ECAD, software, plants, etc. and continued openness.

Joan Hirsch, VP of NX Products, and Paul brown, et al reviewed their thinking about the future of NX. Some of their goals include: building an effortless UI, improving complex product visibility by allowing viewing of multiple data sources and using HD3D visual reporting, integrating multiple design disciplines together, allowing front loading of best practices and knowledge, and requirements management and validation. The chart below summaries much of what they discussed. 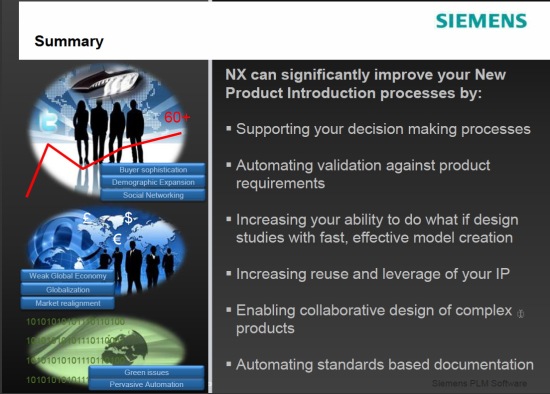 What I found most impressive was their emphasis on non-disruptive improvements and Siemens focus on using making HD3D easy to use to “bring to life” the enormous reserves of data stored within TC. This is their 4th release of synchronous technology (ST) within NX and strides continue to be made in its use, some of which I hope to explore in more detail in an upcoming report.

Later Steve Bashada, VP of Teamcenter Products and Bill Boswell, Director, gave a Teamcenter update. New versions are due next February, with a “more visionary” version due next September 2012. Bashada viewed their key investment areas as the following: systems engineering, corporate social networks, cacheless search, massive model viewing, HD-PLM extensions, and thin client access. A Teamcenter mobility app for the iPad was announced. I downloaded it, but have yet to try it out, because I need to sign into their TC central demo app and database. I may report on this later. Think it’s complicated? Take a look at their portfolio list below. 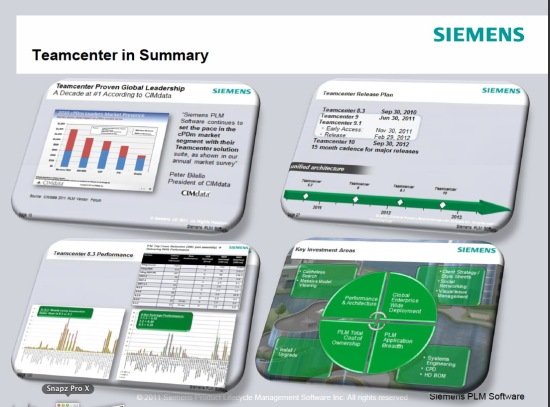 Getting tired from furiously scribbling notes, I then attended a Velocity business update starring Karsten Newbury, SVP and GM of the unit. Newbury discussed their business momentum, noting that in 2010, their growth in licenses was 30%, with Solid Edge (SE) accounting for 50% of that. He is investing in an expanded presence by adding resources [people], channel enablement [his words], and a focus on community for a bigger academic presence and mode direct feedback events. ST3 was well received due to its ability to support both ordered and synchronous approaches. 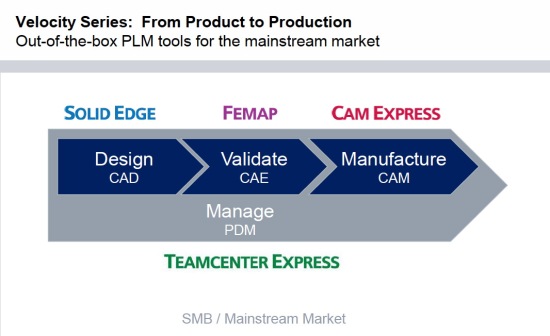 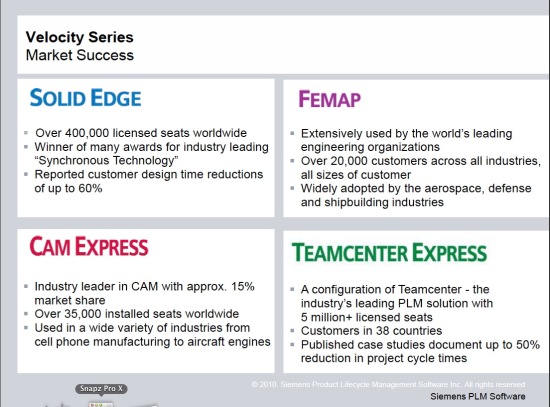 Mario Joyal, of Matritech, a small company in Quebec, described his results using SE with ST3. A recent design took 50% less time and other users found it easy to use. Kris Kasprzak, product manager for SE, described ST4 which is due to release on June 15. We are allowed to discuss some info about the upcoming release of ST4. New tools and functions coming include those for: advanced machine design, expanded collaboration, simulation for sheet metal, and improvements to their already impressive drafting.

After a delightful dinner and cocktails for the press and analysts Monday evening on the top floor of the Rio hotel, we finally ended the day. 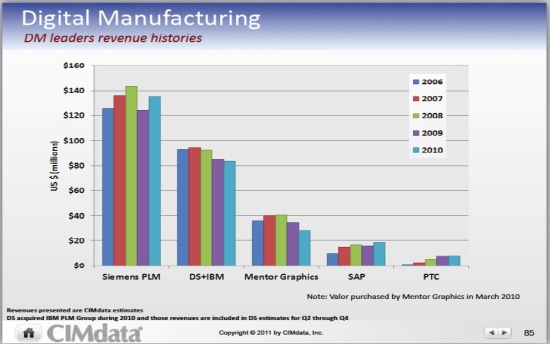 Key manufacturing technology domains include assembly planning and validation, robotics and automation planning, part manufacturing, and plant design and optimization. Amran discussed many of the new capabilities in each of these areas. Amran summarized what Tecnomatix offers their customers

Coffman’s presentation focused on how Ford makes virtual manufacturing work at Ford (it isn’t easy) and how it contributes to Ford’s profitability and design to manufacturing cycle reduction. Here is one example of the continuing benefits shown by Coffman.

And finally, to wrap things up I met with Al Hufstetler, VP Quality Planning and Validation, who took me to task on a comment I made in my blog about the DS acquisition of Intercim. I stated that “In shop floor analytics DS now has the edge.” Hufstetler pointed out that Intercim’s solution uses analytics to isolate issues, whereas, Siemens solution uses a better solution, a feedback system that not only can detect quality issues, but can actively correct them. For more details on this, contact Siemens PLM Software.

Disclosure: Siemens paid for my hotel and conference admission. TechniCom paid my other travel expenses.
—